What does it mean to rebase in Git, and how do you do it?

What is rebasing? What does it mean to "rebase"?

Rebasing is essentially reconstructing commits in a branch to be after a base commit (hence re-base). You can think of it like changing the base of the branch from one commit to another commit so that the Git history shows the commits in your branch as being applied after the last commit of the other branch.

It works like this: let's say you're on a branch called develop. When you run git rebase origin/master, all of the commits on develop are to be "replayed" on top of origin/master.

As a reminder, HEAD represents the latest commit on a branch, so we're "rewinding" HEAD to be the last commit on the branch you supply to git rebase - in this case origin/master. Replaying a commit just means it will be recreated with the exact same data. You can think of this like an old VCR recorder that is rewriting the tape with different parts of video data. When rebasing, we're essentially rewriting history after a certain commit. 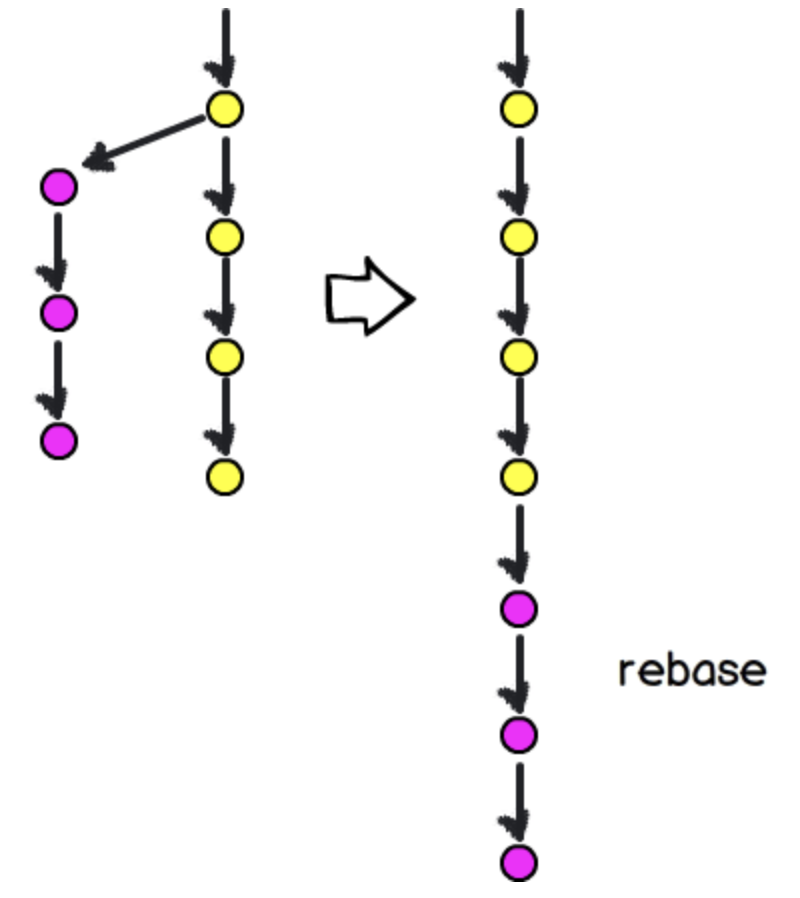 How do you rebase?

From the command line, you can run git rebase. If tracking information is available for the branch (meaning it has an upstream set), it will use the upstream branch by default which will typically be the main branch. You can also manually specify a branch using git rebase [branch] (for example, git rebase origin/main).

After rebasing, when you want to push your changes to the remote branch, you'll need to force push with git push using the --force flag. This is essentially confirming that you know you're updating the remote branch with new commits and the old ones will be lost.

Why would you want to rebase?

In all honesty, you won't find yourself needing to rebase all too often in Git. One common use case for rebasing is when you create a new branch off of the production branch (we'll call this main) and need to pull in remote changes. The last commit in main is the base commit for our new branch. Let's say a co-worker pushes some changes to main after you created your branch.

To make sure your branch is up-to-date with main so you can eventually merge your branch into main when it's ready, you need to pull in your co-workers (remote) changes. You can either merge the changes on top of your existing commits in the form of a merge commit (which happens automatically when using git pull), or you can rebase, which allows you to have your co-workers changes integrated before your new commits, as if you created the branch from that point.

This has the advantage of making the Git history or git log more readable and straight-forward, rather than needing to deal with merge commits which may become messy in a busy repository. It also avoids conflicts when it’s time to create a pull request.

This can be helpful if you want to rewrite history. Let's say you accidentally pushed some code you shouldn't have...

If you wanted to rewrite history to make it seem like this commit never happened, you can enter interactive mode by using git rebase -i [branch]. You'll enter a screen with a list of the commits to be rebased on your working branch (this is everything that will be "replayed"). In interactive mode, you have the ability to remove commits, squash them, etc. There's a list of commands you can use with the commits listed below.

"If you remove a line here THAT COMMIT WILL BE LOST."

Meaning if we delete a line containing a commit we don't want, it won't be applied on the branch and it will not appear in the history after rebasing. It will be lost to time.

When not to rebase

Rebasing is good for making Git history and Git logs more readable so that commits follow a sensible timeline. However, since it rewrites history, it can also be dangerous and present some problems if you collaborate with others on the same repository.

Rebasing works internally by recreating all of the commits from the latest commit on the target branch, meaning if you create a new branch off from main called new-feature, add 3 commits and then rebase main into new-feature, the 3 commits you added to new-feature will not have the same commit hash that they previously did. A consequence of this is that now those old commits are essentially lost to history, and if there are other people who had your branch checked out before you rebased, those people will need to pull in your latest changes.

This is more apparent when rebasing while someone is in the middle of a review:

Rebasing can be confusing, but it boils down to changing the history of a branch so that commits from a target branch will appear in the timeline as if they happened before any of your changes in your working branch. The official documentation for Git explains more about the specific details on

Feel free to share around, or if you think I've made a mistake, request a change on GitHub!

Subscribe to the Nevuletter so you never miss new posts.